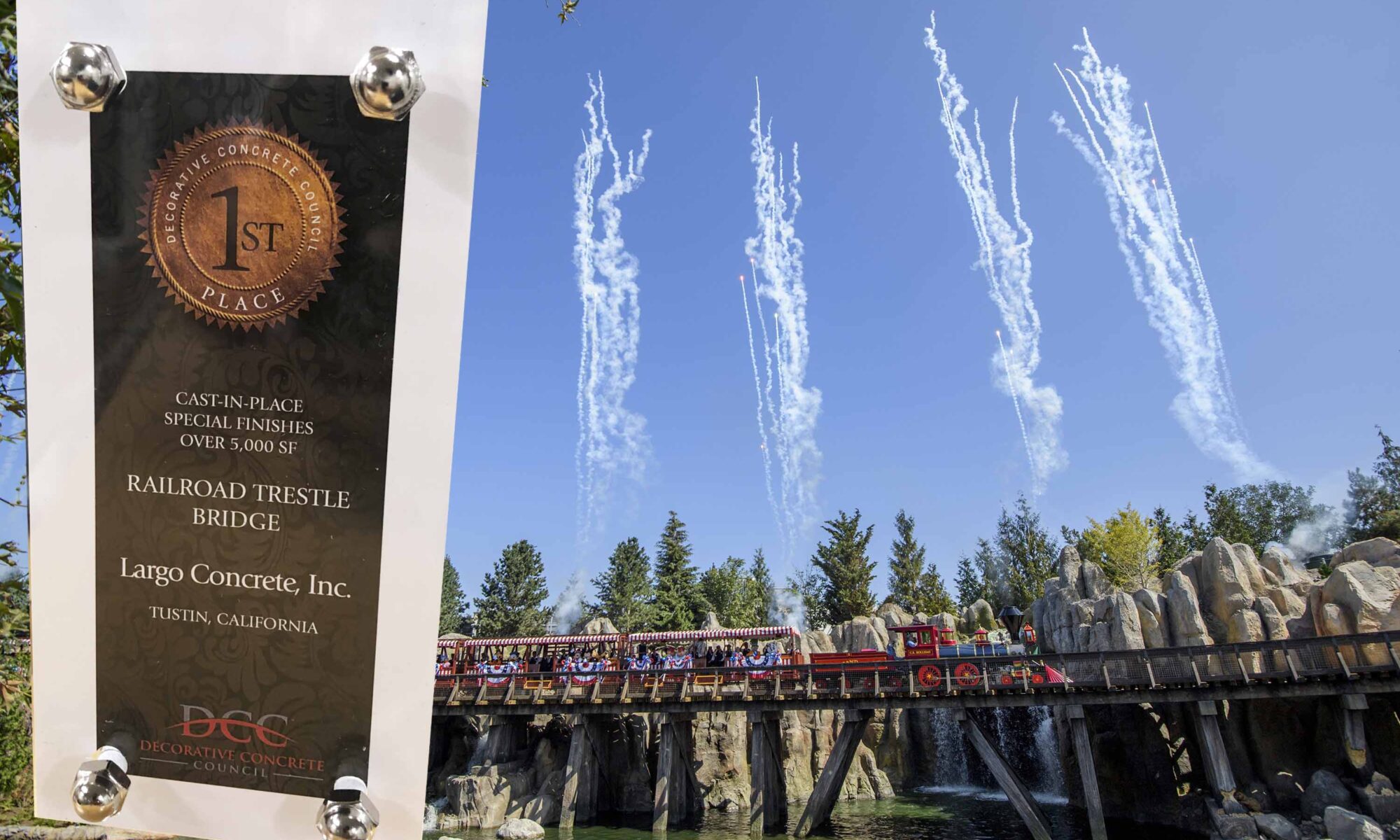 The Decorative Concrete Council awarded the Disney Frontierland Expansion project the “Cast in Place Special Finishes Over 5,000SF” this week in a virtual ceremony. The goal of this project was to prepare the Disneyland park for the new Star Wars attraction. In addition to four tunnels, multiple retaining walls and a marina, Largo’s scope included a concrete trestle bridge for the railroad at the Rivers of America attraction. Although the visual aspect of the end product is exquisite, the details that were put into the fabrication of the two elements of the structure; the columns and hammerheads, and the concrete mix design used to simulate an aged wooden railroad trestle bridge, is also noteworthy.

The columns started in the back lots of Walt Disney Imagineering as an image in the mind of the design team. This image was transformed into approximately 50 lineal feet of hand carved foam positive. This was reviewed by the Disney team to confirm their vision and sent out to Fitzgerald Formliners to confirm that the positive would produce a usable form liner. A number of changes were made in the foam positive to ensure that no negative spaces existed in the positive to allow for smooth removal of the form liner. To allow for proper alignment of the four columns that attached to each of the twelve hammerheads, relative to each other, the column forms were fastened to a wall form.

4000 psi @ 28 days Self Consolidating Concrete mix with a water to cement ratio of 0.44. The cementitious content was 8.5 sacks that was 70% Type II/V cement and 30% Type F Fly Ash. Nominal spread was 25” to 30” but it was usually in excess of 27”. It has a maximum aggregate size of 3/8”, but since the mix needed to reveal very fine details it was proportioned to contain 70% Washed Concrete Sand. All of the aggregates are from Holliday Rocks Upland California Facilities. The admixtures in the mix design included: a Type F High Range Water Reducing Superplastizing polycarboxylate, a workability-retaining admixture that provides flexible degrees of slump retention without retardation. And when needed (in this case it wasn’t but was always available) a viscosity-modifying admixture that is specially developed for producing concrete with enhanced viscosity and controlled rheological properties that increases resistance to segregation while facilitating placement and consolidation.

The hammerheads that span across the columns were formed out of rough sawn dimensional lumber of varying widths on top of the above-mentioned columns. Each of the twelve hammerheads were formed with no common joint plan of the rough sawn lumber. Steps were taken to raise the texture of the rough sawn lumber. Each board was soaked in water overnight and sealed with form release to accentuate the rough sawn look to the vision of the Imagineers. The hammerheads were also poured with the self-consolidating concrete mix design that was used in the columns.   Typically, these decorative types of concrete elements are a post installed façade covering a structural column, but with the load requirements of the train, envisioned size of the elements and the environmental concerns of the river, the above summarized use of concrete was developed and put to use.