The Entrada Creative Office in Culver City, CA is truly a unique structure combining state-of-the-art design with cutting edge engineering. The building is 13 levels tall including the roof with six levels of commercial office space above six levels of parking, one of which is below grade. The podium level is dubbed the “Sky Deck” and features a 14,000sf landscaped amenities space with a fitness center, conference room and open space for all tenants to enjoy. The 815,000gsf building along Centinela Avenue is clad in glass and metal screens with exposed concrete interior columns and walls. Drivers along I-405 will be drawn to the open-air private balconies stepping up the commercial levels on either side of the building. The rectangular office levels are rotated with respect to the lower parking floors creating a substantial corner cantilever at the west face of the building making a strong architectural statement.  The load of the cantilever deck is carried by a massive structural post-tensioned upturn beam located on the West edge of the roof.

Beneath the surface the Entrada development began with three mat foundation pours averaging 4,500CY. Two of the mass concrete pours at the elevator cores required a thermal control plan to ensure temperatures did not exceed 165 degrees during placement. Parking levels hold 1,044 stalls and 695CY of shotcrete walls line the perimeter of the basement.

Elevated decks are concrete voided slabs or “bubble decks” supported by high-strength cast-in-place columns and walls. Voids are created using hollow spheres made of recycled plastic and arranged in 8’x10’ wire mesh grid prefabricated offsite. Once on site the grids are placed on a layer of two-way rebar installed on the plywood deck with another layer of reinforcing on top. Deck pours begin by placing the first 4” to 6” of readymix to secure the voids in place before the balance of the slab is poured. Elevated decks ranged between 16” to 20” with typical levels at 18” thick.

The flat plate, bubble deck system allowed architects to maximize floor space in the building with a typical bay measuring 30’x45’. Flat decks also enhanced production flow by eliminating beams, drop caps, depressions and hanging form build up. On average Largo poured 11,000sf of deck every other day during the elevated slab duration of the project.

Overall, the voided slab construction reduced the weight of the structure nearly 30% in comparison to conventional methods of waffle slab or post-tensioned decks. This measure not only limited the seismic forces and foundation loads but also reduced the environmental impact of the project with significantly less material to transport and a faster schedule. The company supplying the voids was BubbleDeck North America.

The corner cantilever at the Sky Deck level required shoring from street level to remain in place until the 3’ wide by 10’ tall upturn beam on the roof deck was poured and stressed. All six stories of office space and the roof are suspended at this corner from this same upturn beam on the roof. The corner columns of the cantilever have continuous reinforcing from the first commercial level to the roof. This feature required the shoring removal process to be reversed with the upper levels being stripped first while checking for deflection throughout the process.

Largo poured over 47,000CY in the structure over 11 months. General contractor KRPS, Gensler architects and Saiful Bouquet structural engineers aim to have the project complete in the first quarter of 2021 making it the first, large scale structural bubble deck system on the West Coast.

Largo placed over 70,000CY of concrete across 970,000sf of slab-on-grade, 243,000sf of suspended decks and beams and 414,000sf of slab on metal deck. Largo placed concrete on 296 different days averaging 235CY per pour! The majority of the 585,000sf Exhibit Hall Floor was placed in 88 working days, which averages out to placing 6,600sf every day for four months! General contractor Martin Harris/Turner Construction, JV, TVS Nevada Architects and Magnusson Klemencic Associates structural engineers, the development is scheduled to be complete in December 2020.

Largo topped out at the 953 N. Sycamore project last week with the CIM Group in Los Angeles, CA. The development is two levels below grade and nine levels above with only the top three floors allocated to occupied space. The remaining levels of the 214,573gsf development are dedicated for parking a total of 418 cars. Designed by Lorcan O’Herlihy Architects and the BPA Group as structural engineers, the building twists away from the street as it moves up causing some of the cantilevered formwork and shoring to rest on the roof of the adjacent building.

Two blocks to the east along Romaine St., Parking Structure C Topped out for The Lot Studios around the same time. This eight level, long-span parking structure was completed in the design-build project delivery format. Largo Concrete was the general contractor self-performing the concrete place and finish and unit masonry scopes of work. The structure totals 140,790gsf and holds 398 total stalls with two elevators and two staircases. Working for the same CIM Group, the parking structure was designed by Parking Design Solutions and Ficcadenti Waggoner and Castle Structural Engineers and is scheduled to open early summer 2018. 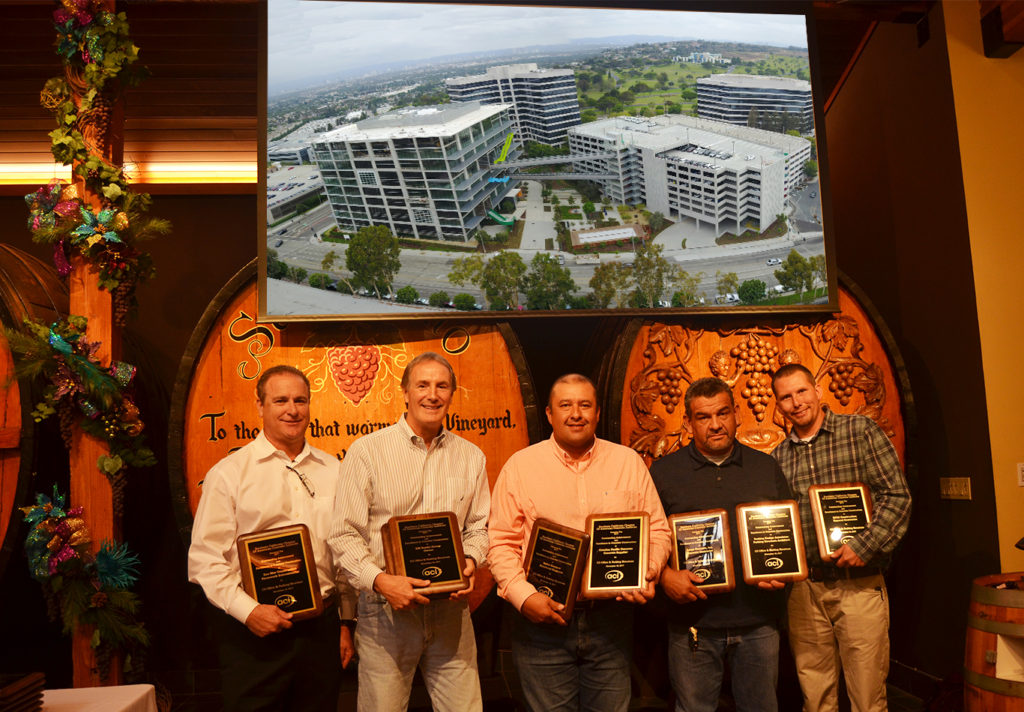 Largo completed a 5,000cy mat pour at the 953 N. Sycamore project in Los Angeles on June 17. Running three pumps, the foundation pour lasted over 12-hours with the first Cemex readymix truck arriving at 2:00 a.m. Designed by Lorcan O’Herlihy Architects and structural engineers at the BPA Group, the uppermost levels of the mid-rise commercial building are offset from the parking levels below, creating a twisting effect as the building moves up. The building is scheduled to be complete in March of 2018 and has a total of 11 levels, two of which are below grade, spread across 214,573gsf. This is the third project Largo has worked on with GC/Developer the CIM Group over the last couple years; the 925 La Brea project and 7007 Romaine are both located less than a block away. Later this summer, Largo begins work on the 904 La Brea project with the same owner, also a stone’s throw away from 953 N. Sycamore.

Construction is moving forward on the 7007 Romaine project in the Hollywood Media District, with Largo pouring our last structural deck earlier this month. When complete, this 153,000gsf structure will feature 60,000sqft of office space with balconies, outdoor decks and floor-to-ceiling windows. The two levels of office space will sit atop a 4 level parking garage which provides 298 stalls with retail space on the ground floor. Close to the 101 freeway and bordering West Hollywood, the development is planning to open in the third quarter of 2017. We are working with Shubin + Donaldson Architects, JLA Structural Engineers and general contractor the CIM Group to deliver to project on-time and within budget.

Working on the foundations at the 225 California Commercial Building

With the rat slab complete, the protection slab, waterproofing and the mat foundation will follow shortly at the 225 California commercial building in Burlingame, CA. The building has a structural concrete frame and features 3 levels of below grade parking with 130 stalls and 5 levels of retail and commercial space above. Working with general contractor Lusardi Construction and designers MBH Architects and ZFA Structural Engineers, Largo expects to be topped out during the summer of 2017.

Largo topped out at the Culver City Creative (C3) Office Tower and Parking Structure earlier this month with general contractor KPRS. Designed by Gensler and Saiful Bouquet the commercial building stands seven levels tall with 4 mezzanine levels totaling 321,000gsf. All the building concrete received an architectural finish and will remain exposed once the building is complete. Some unique structural elements include columns so large they are practically walls, aka ‘walumns’ and ring beams on the perimeter of the building at the mezzanine levels.

Adjacent to the office building is the nine level, long-span parking structure which also topped out this month. Designed by Parking Design Associates and Miyamoto Int’l this shear wall structure is two bays wide and will house 990 stalls across 326,741gsf.